WHERE IN THE WORLD IS BURGHY? 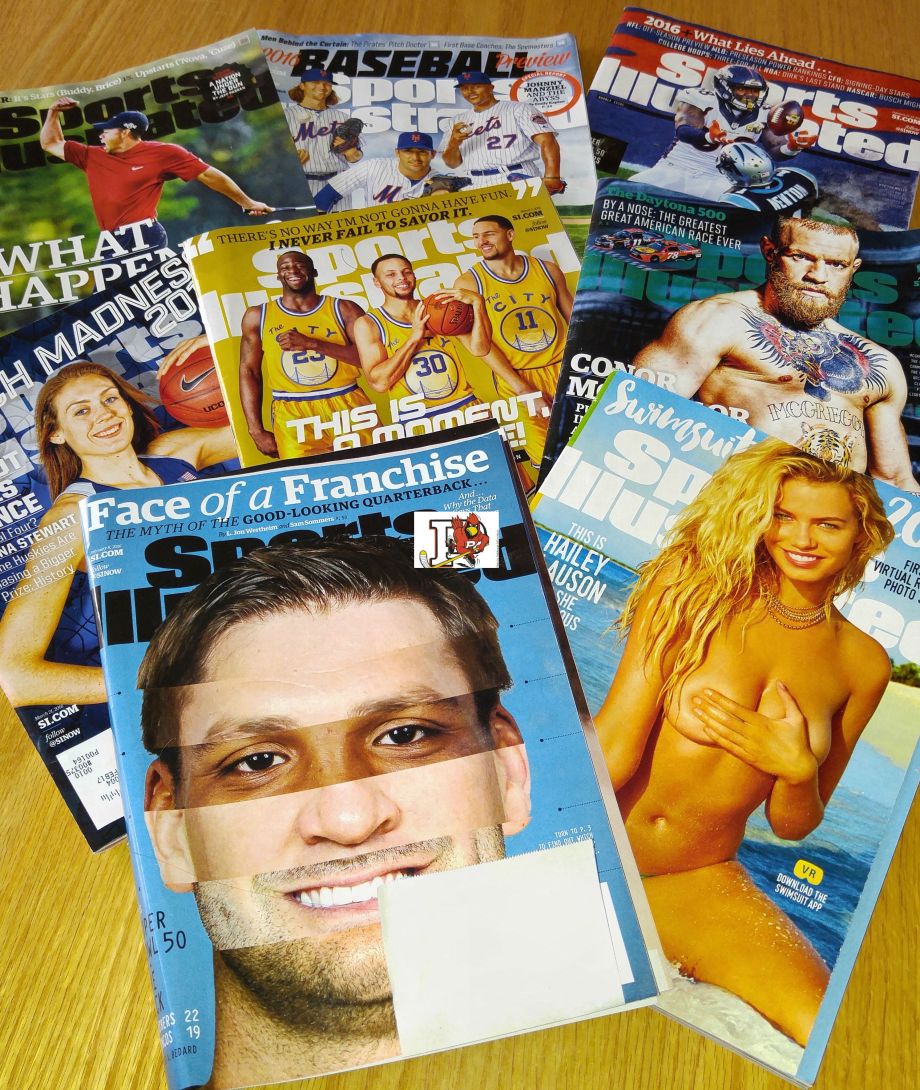 These are the covers of the current Sports Illustrated that are in my house.  What do you notice about these covers?  Yep, that woman is grabbing her boobs and looks naked, but no, that’s not what I wanted you to notice. Well, not exactly.  What I wanted you to notice is that only two of those eight covers are of women, and out of those two women, only one is dressed. What I extrapolate from this is that women are not as valued as men in the sports industry, in society, and in Plattsburgh, our local microcosm of society.  Never has this been more apparent to me than after going to the poorly attended (and poorly advertised) Women’s Ice Hockey National Championship Celebration at SUNY Plattsburgh.

Oh, and can you find Burghy, SUNY Plattsburgh’s mascot, in the picture?

First of all, let me tell you that I know very little about sports in general.  Growing up, I was the next-to-last kid picked to be on a team. In college (SUNY Plattsburgh), I never went to any sporting events, but I would see Burghy around campus..  My favorite baseball team is Boston (because my dad is a Red Sox fan), but I can’t name more than 5 or 6 players after 1976.  I guess I didn’t really start paying attention to sports or attend any sporting events until I became a college English teacher.

My first year teaching, some of my students were on the Women’s Soccer team at Clinton Community College.  They asked me if I’d go to a game.  I thought it would be a fun outing for my three young children, and I could support my student athletes, so to the game we went.  What better idea than take my kids outside, let them run off their energy, and cheer on my students? I think the CCC Women’s team did very well that season. Years later, I ran into one of the soccer athletes at a social gathering, and she expressed how happy she was to see me at her games.  She mentioned that having her professors go to the games and support the team made her years at CCC that much more meaningful.

Since that first experience, I have attended Men’s and Women’s soccer, basketball, and hockey games at CCC and SUNY Plattsburgh. I remember watching the SUNY Plattsburgh Men’s soccer team play a few years ago,  while my kids chased our dog around the outskirts of the field at the Field House.  The fans at most of the games we attended were pretty much the same, with the blaring exception of hockey. The Men’s Cardinal Hockey team has many more fans and more collegiate support (my personal opinion, obviously) than the Women’s, and, for the life of me, I can’t figure out why.

My son, Jonathan’s, favorite part of going to the Men’s hockey game was to see Burghy and eat the huge chocolate chip cookies.  After waiting on line for tickets (we learned to get there early), we’d get our cookies and drinks, sit on the hard wooden benches, and wait for the show to start.  Rock and roll blasted from the speakers, the lights went out, the strobe light and colored lights flashed and spun on the ice, and Burghy would emerge on the ice, skating and waving.  Then the game would start.  Players would get smashed into the plexiglass barriers, whistles would sound, and the fans would chant and stomp their feet in support of the male Cardinals.  Very few seats were empty in the arena.  What a fun Saturday night!

I haven’t gone to a Men’s game in a few years, but I know that tickets are now six dollars, that Burghy still skates and waves, that the line is out the door to get into a game, and the cookies are still good.  The arena has been updated, and many fans religiously attend games to support the athletes.  For many families, watching the Men’s Hockey team play has become a tradition and a great way to spend a Saturday night.

For the past few years, I’ve had more hockey players in my classes than from other sports, although the basketball team players are starting to become a presence, (next semester I’ll have to start going to both sports).  I had never attended a Women’s Hockey game, so Tim suggested we go.  He thought it would be a fun date, and he said the women were talented players.

The first Saturday we go, it’s an afternoon game.  Okay, well the Men’s team gets the ice that Saturday night.  Tim and I go right up to the ticket booth where there is a woman just finishing up buying two tickets.  She turns to her companion and says, “They’re charging two dollars to get in now.  Maybe more people will want to see them now that they’re charging admission; after all,  they’re winning every game!”  Hmmm…..

Tim and I get some drinks and snacks and easily find an empty, plastic seat.  To our left is a small student cheering section, dressed in black, red, and white.  They seem quite pumped up!  Good!  I wait for the lights to dim.  Hey, where’s Burghy?  In the regular arena lights, the umpires skate out and check the goal nets.  Then the announcer introduces both teams.  No light show; no Burghy.  Hmmm.  Then the game begins.

Just like the men’s team, these women are hungry for a win.  They fiercely go after the puck, slam into each other, and do all those cool hockey things.  There’s penalties on both sides for checking.  The ladies are ruthless, and they don’t let the opposing team score.  Between plays, I look around the half-empty arena.  As much fun as I’m having, I can’t help wonder why there aren’t more fans.  After the victorious ladies leave the ice, Tim and I leave the arena.  There is a long line of fans waiting to enter to see the Men play.  Suddenly a T-shirt and memorabilia kiosk has appeared in front of the entrance.  There’s excitement in the air.  I leave thinking “Why aren’t these people watching the women play?”  (BTW- the men lost the game that night.)  For the next few weeks, we attended the rest of the regular season, and then the ECAC and NCAA championships.  I’m not sure where Burghy was. Maybe he was writing an essay  for classes all those days, and couldn’t watch the Lady Cards dominate the ice. 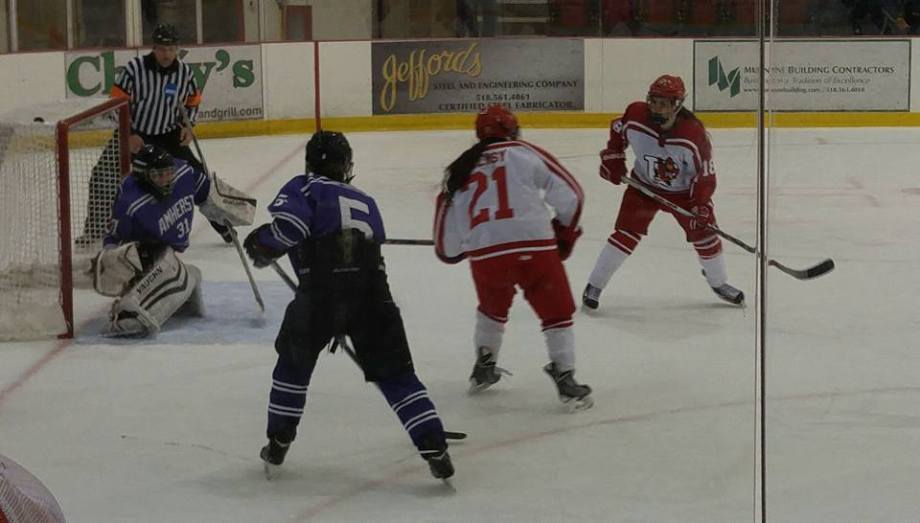 Last Tuesday, Tim and I attended the celebration of the Ladies winning the NCAA Championship, the third time in a row. There were maybe a couple hundred fans there, if that.  Know how I knew about the celebration?  My student hockey athletes told me in class.  The day of the celebration, WPTZ announced it on the evening news, stating that the event would take place in an hour.  I also got a faculty digest email informing the campus community of the event.  No wonder not many people went. I wonder how much publicity the Men’s Hockey team would’ve gotten, had they won, which they haven’t done since 2001, but hey, at least they have Burghy!

But you know who did go?  The hard-working athletes who deserved the recognition.  The president of the college went.  The mayor of Plattsburgh went.  The loyal fans of the players went, and we went.  Oh, and Burghy was there, finally!  I hope the Lady Cardinals know that they have fans out there who support them and value all the hard work and dedication they put into this season.  Congrats to you!